My second dressmaking attempt was this Burda Style dress (the one in the middle), no.6914.  I was going to say it was a little more advanced, but perhaps it wasn't - that could have been why it failed.  Maybe it was just too simple.  On me, it looked like a pillowcase, with a couple of pleats in the neckline.  (This is the yardstick I use for all my attempts at sewing clothes now - does it look like a pillow case?  No.  Hooray!)

Having said that, I've seen some really good reviews for this pattern - so maybe something wrong with my dress, or maybe i'm just the wrong shape for it.  Looking at the pattern now, it looks entirely possible that the dress is resting on the lady's arms and shoulders and then making no contact the rest of the way down.  Maybe you just have to be really thin to wear it.

As I said, one of the problems was the pillow case effect.  The only attempt at fitting was the darts to the neckline - and these look rather stretched if you have anything by way of chest to speak of.  For the rest of the dress, if you're wide enough to touch the sides, it just sort of bags.  Maybe you just need to go several sizes too big.

The other problem was that the neckline and sleeves were quite tight.  The neck does look fairly close fitting in the picture, but I would have said it was uncomfortably so.  You can't see it in the picture, but there are two pieces of bias binding to the throat - one in front of the other - presumably decorative, but they add to the tourniquet effect.

Finally, part of the reason I chose the pattern was that panel on the hem which draws the bottom of the dress in, giving it a rounded look.  For whatever reason, that didn't really translate into reality.  It seems to taper slightly on the hanger (see second pic) but the effect was lost when I put it on. 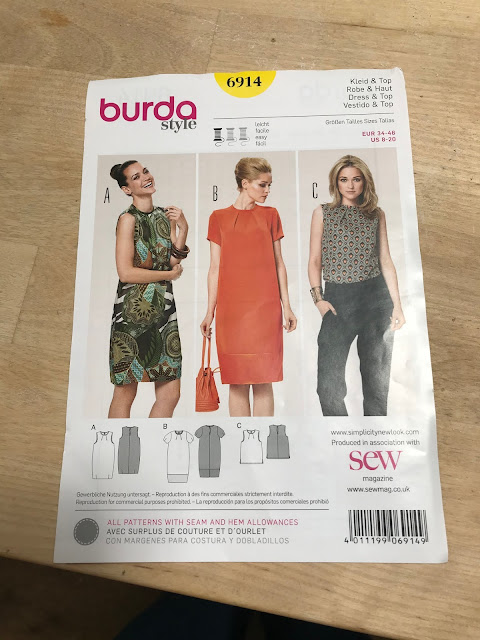 I'll spare you the pictures of me wearing it, but this (below) is what it looked like on the hanger.  It's annoying because the fabric is absolutely lovely, and I had to really struggle to get the pattern pieces to fit on the fabric.  Hopefully I'll find something I can reuse it for.

Anyway, other than the fact that the dress didn't really work on me, the pattern seemed easy enough to follow.  The bit that I was worried about was the bound button loop at the back of the neck, and I didn't finish this in the end, since it was obvious by that point that the dress wasn't going to be wearable. 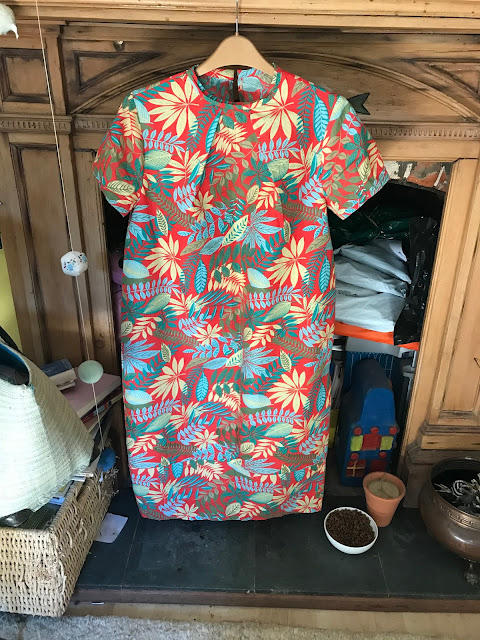