Barring a few half-arsed attempts at vintage-style underwear, and an incredibly unflattering 'pillow case skirt', I've never tried making clothes before.  It always just seemed incredibly complicated.  Don't get me wrong: I am as capable as the next person of sewing a piece of fabric into a tubular shape, elasticating one end and hemming the other, but the results are not very impressive (not on me, at any rate).  Clothes that one would actually be happy to wear (out of the house) are harder to come up with.

However, I've been watching the Great British Sewing Bee, and they do a cracking job of making dressmaking seem accessible - particularly the way everything seems to be made within two or three hours.  So now, making clothes has become a bit of a lockdown hobby for me.  The first thing I tried was - as on the Sewing Bee - palazzo pants.  This was the nearest pattern we had: New Look K6459. 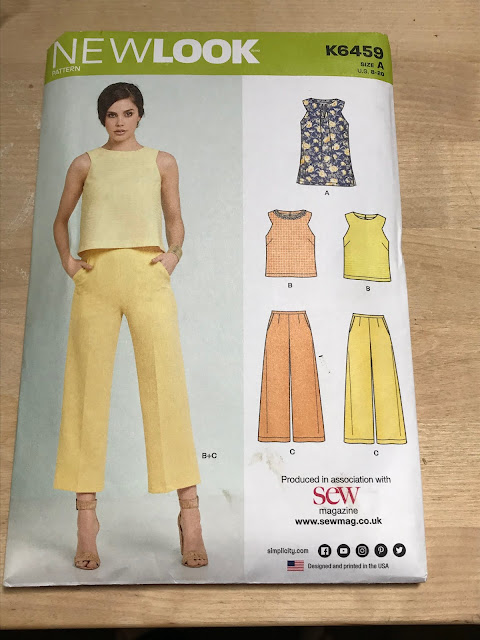 I made them out of gorgeous navy linen from Merchant & Mills - not cheap but, as I said, if you're going to make something you actually want to wear, you probably have to push the boat out a little bit.  They sit on the waist, fasten at the back with a zip and a hook & eye fastening, have side pockets and, supposedly, are cropped, stopping just above the ankle.  This was news to me: with my little legs, they're pretty much ordinary length.

They didn't seem to be recommended for any particular skill level, but they were okay to make - not 'easy' exactly, but I don't think they were beyond my beginner skill set.  I found the pattern confusing to start with, but once I got used to it, I didn't have any problems.  Oh, except perhaps with the ends of the waistband, by the zip; I ended up hand-sewing these to try to get a neat finish because I couldn't work out how to do it properly on the machine.

I didn't make any changes to the pattern - I didn't have either the ability or the confidence at this stage (now, a week or so later, I still don't have the ability, but the confidence has definitely grown!).  I like them - I was terrifically chuffed to have been able to make them - and I probably will wear them. Even in public.

However, in retrospect they didn't turn out quite as I imagined.  For a start, all the trousers I usually wear sit on the hips rather than the waist (a 1990s thing?).  These sit on the waist, which wasn't obvious to me from the outset, and I do find it a difficult style to get used to.  It's actually not unflattering, particularly for someone like me with short legs, but what can I say - food is important to me; I resent trousers which make me feel guilty for eating well(!)
Also, if I could go back and make these again, I'd probably - I'm not sure how to say this politely - extend the crotch...?  My short legs go with a slightly longer body.  'Wedgie' is a strong word and I'm not using it, but lets just say I am forever alert to the possibility whilst wearing them.  Possibly too much information - apologies - lets move on.

The last thing I'd say is that, as a novice, I didn't pay much attention to finishing the seams, and the pattern doesn't give any instructions as to this.  As a result, they are fraying now, which looks untidy and presumably(?) affects how long they last.  If I made them again, I'd do something to the seams - zigzag stitch them, or whatever.

I have added some pictures below - I'd forgotten how much fun it is playing around with the camera.  Please excuse the wrinkles; they were quite well worn by this point. 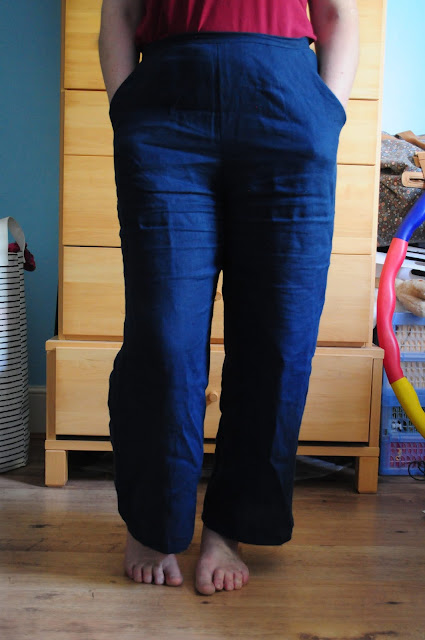 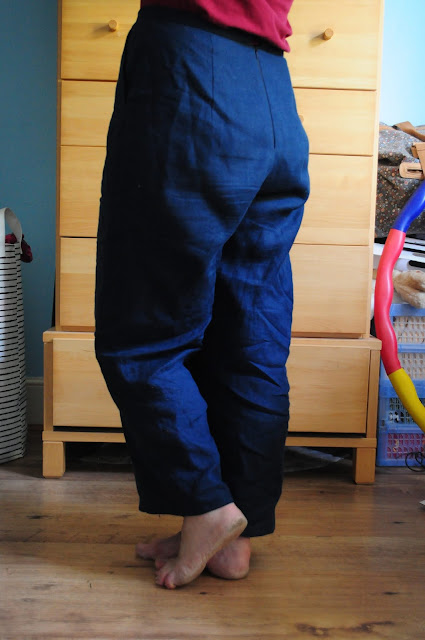 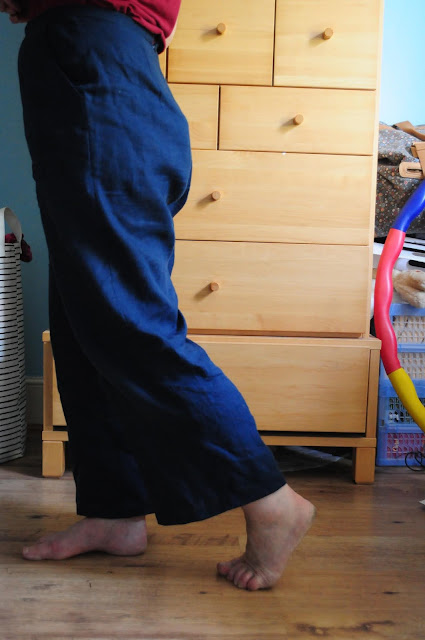