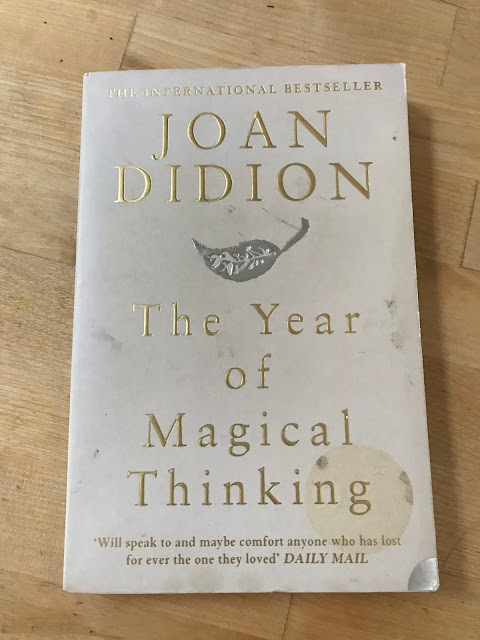 Excuse the grubby cover: I think this book has been passed round a fair few people.
This should have been absolutely awful to read - it's about the year following the death of Didion's husband, and how she copes.  Apparently her daughter, who was seriously ill during the year covered by the book, died not long after it was published, which seems terribly harsh.  One would hardly blame Didion if this were a miserable book.
It's not though.  Didion worked as a journalist, and she has a rational, analytical, New Yorker-magazine style of writing, which is very upbeat.  This is really appealing anyway, whether the writer is male or female, but I find it particularly surprising in women writers.  I always expect an extra layer of cynicism and self-consciousness from women, and Didion lacks this.  She talks briefly about domesticity and its attractions in a way that seems to mark her out as being of a certain era, but her writing is unmarked by anxiety over the way she looks, her age, or weight, the way she conforms to contemporary ideas about women, the way people perceive her, or any awareness of vulnerability to harassment or condescension on the basis of her sex.  I don't know whether she doesn't notice these things, or whether she simply choses not to write about them.  I suppose you could argue that the latter would be problematic.  Nonetheless, she is refreshing to read.
So I think the book is saved from being depressing by this journalistic style - but also by her investigative approach.  She deals with the hospitalisations of both her husband and her daughter by researching the medical phenomena involved and discussing it in great detail.  She also talks, sometimes amusingly, about her interactions with doctors, and the way she tries to smuggle her research past them - delicately describing her daughter as 'waterlogged' because she notices how the doctors stiffen when she uses the word 'edema'. (p.103) She buys scrubs to wear at her daughter's bedside in the ICU, and reflects wryly that it never occurred to her at the time that this 'could only be viewed as a suspicious violation of boundaries'. (p.106)
I really enjoyed it; I will definitely look out for more of her books. 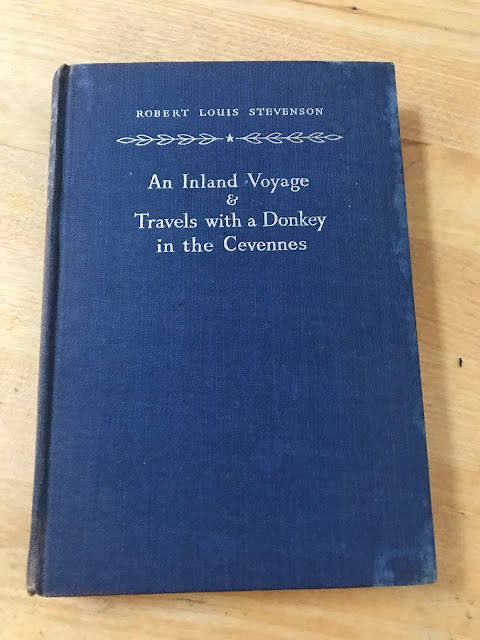 The first part of this book - An Inland Voyage - reminded me a bit of Three Men in a Boat - a less commerical version; it was funny but not professionally so.  Stevenson, for example, makes much of his personal difficulties in travelling: 'he is born a British subject [he refers to himself in the third person], yet he has never succeeded in persuading a single official of his nationality.  He flatters himself he is indifferent honest; yet he is rarely known for anything better than a spy, and there is no absurd and disreputable means of livelihood but has been attributed to him in some heat of official or popular distrust'. (p.24)
He has a lovely turn of phrase - describing the sea as having 'a rude pistoling sort of odour, that takes you in the nostrils like snuff' (p.42), and describing his first meal after one stretch of the journey by saying, 'I made a God of my belly'! (p.93)
He is self-consciously English, self-consciously a 'gentleman', and yet in some ways seemed very modern in his politics - noting, for example, that the poor are more charitable than the rich. (p.36)
In the second part - Travels With a Donkey in the Cevennes - he goes on a walking tour through rural parts of France with a donkey called Modestine ("Proot!").  He describes her at one point, with his sleeping bag on her back, as 'a self-acting bedstead on four castors'. (p.143)  It is a self-consciously humorous relationship that he portrays, but I did feel very, very sorry for the donkey.  Despite insisting that, as an Englishman, he could never mistreat a female, and despite occasional expressions of wry affection, he really does treat her badly.  Even when he is told that his own mismanagement of her load has been causing her great discomfort - that she's actually bleeding from it - he can still only complain about her. (p.170)
Although he seems, on the whole, to be fairly liberal and easy-going, his attitude to Modestine in some ways presages his attitude to women in general.  On p.161, he describes two young women he passes on the road as 'a pair of impudent sly sluts', which is a bit harsh, although presumably the word 'slut' meant something slightly different then.  Then there is his description of Clarisse, a waitress in one of the inns at which he stops. (p.204) He analyses her attractions in great detail and feels compelled to relay these to her in person - to which she reacts not at all.  He reminds me of the curate cousin in Pride & Prejudice, who proposes to Elizabeth Bennett - pompous, sweeping, assuming his own advances will be welcome, ignoring the response, candidly enumerating her faults and grandly assuring himself that these can be improved upon.
Something I did like about this second part of the book were his descriptions of sleeping rough.  He shies away from this initially, but it is his ambition from the outset and eventually he is caught short and forced to camp out alone in the countryside.  In all but one case (see p.166, 195, 221), it is a positive experience - surprisingly cosy, liberating, close to nature, and free from apprehension.  He only fear is 'of discovery and the visit of jocular persons in the night' (p.210), although at one point a man passes on the road nearby where he lies, drunk and singing loudly, and the experience is not an unpleasant one.  'There is a romance,' he says, 'about all who are abroad in the black hours, and with something of a thrill we try to guess their business.' (p.196) It's one of the few times in the book he shows any signs of being a writer of fantastic pirate stories.  As I said, it is otherwise rather in the style of Jerome K. Jerome - the bumbling English traveller. 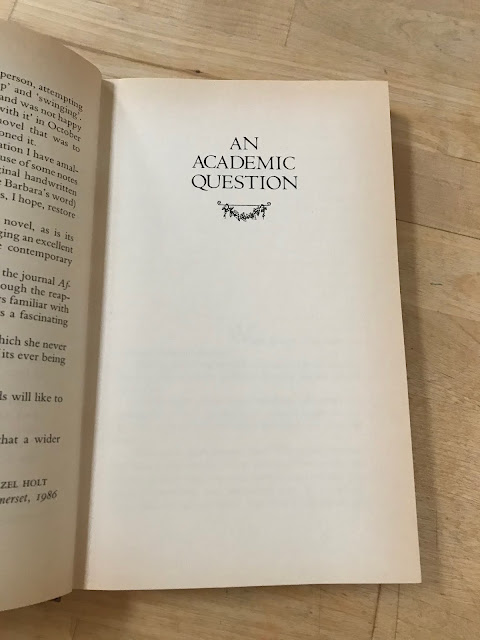 This is An Academic Question, by Barbara Pym.
There is a bit in her introduction to The Long View by Elizabeth Jane Howard, where Hilary Mantel - talking about the modern re-evaluation of female writers who were underrated or patronised in their own day - says that Barbara Pym was 'neglected, rediscovered, consigned again to being a curiosity'. (p.xvi)  In a piece which shows great admiration for Howard, Pym gets rather short shrift.
Undoubtedly this book is lighter and less challenging than Howard's, and Pym herself seems rather less rock 'n' roll.  In this sense, you could argue that Howard is easier to advocate for.  However, I enjoyed this book - and Pym's work in general - much more than The Long View.
What I like about Pym's writing - particularly when comparing it with Howard's - is that it really lends itself to the female reader.  Her female protagonists are exemplary.  I love their equilibrium, their self-assurance, their sunny imperviousness; the fact that they don't care what people think of them.  Not that they are blind to how they appear to other people, but they can live with other people's poor opinion.  It's not - also - that they don't care about people generally; all of Pym's protagonists I've come across are indeed 'excellent women' - cake-baking, flower-arranging, tombola-manning types - who do their community bit cheerfully and with a great deal of humour.
They don't get hurt though, beyond their ability to deal with it.  They suffer plenty of upsets - being pitied as spinster singletons, or unhappily married, cheated on, passed over for affairs, they have children they don't feel very maternal towards.  None of these things make for unhappy or depressing stories though.  Pym's women are robust and practical, wry and self-accepting in their flaws.
I suppose you could argue her stories are a bit 'one note', but I think it's a good note to stick on.
None of which is to say anything about this particular book - An Academic Question - except that it's probably obvious that I liked it.  It sounds, from the introduction, like a bit of a posthumous mish-mash, cobbled together from various drafts by her literary heirs.  You can tell (and I'm not convinced she would have been pleased at the publication of efforts she was clearly unsatisfied with), but it was a good read - I read it in one sitting (not that I have much else to do) - and recogniseably substantially Pym's work.
There are little odd gem-like nuggets that stand out.  I loved, for example, the relationship between Caroline and her daughter, Kate - not a close one, but warm nonetheless.  'One sometimes reads in Edwardian memoirs of a child retaining a romantic memory of its mother dressed to go out to a party, coming in to say goodnight.  I wondered how Kate would remember me in my trouser suit which gave little scope for conventional glamour.' (p.6)  Also her relationship with the women with whom she thinks her husband is having an affair.  'I imagined her in those days in the early sixties, young, handsome, eager... with all the potential of a distinguished career before her.  And now?  As she mounted the platform... a spontaneous impulse of generosity made me turn to Alan and whisper, 'Doesn't she look lovely!'  He made no reply but did not take his eyes off her and I too found that the pleasure of looking at her made up in some way for the dullness of [her] lecture.' (p.77)
Excellent Women is still my favourite of her books, but I'd highly recommend this one all the same.
Posted by Ruth at 10:25

Email ThisBlogThis!Share to TwitterShare to FacebookShare to Pinterest
Labels: An Academic Question, An Inland Voyage, Barbara Pym, book reviews, Joan Didion, Robert Louis Stevenson, The Year of Magical Thinking, Travels With a Donkey in the Cevennes