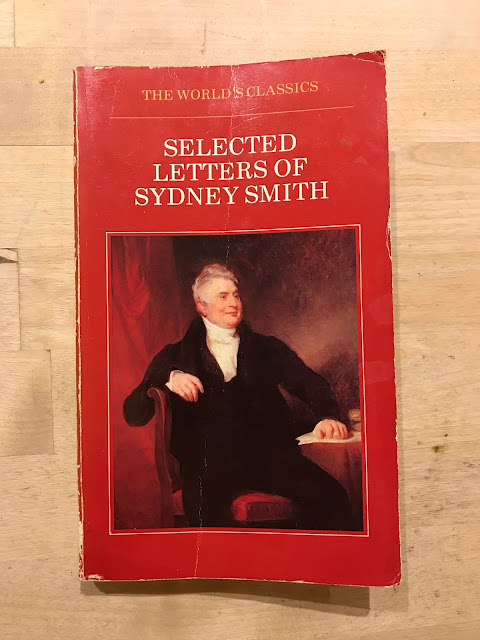 Selected Letters of Sydney Smith, ed. by Nowell C. Smith, Oxford University Press (1981).
I don't recall ever having read a volume of letters before.  Less confessional than diaries, less plot-driven than a biography: they don't exactly reach out and grab you by the throat.  On the other hand, they may give a better impression of a person, as he appeared to his contemporaries, than other forms of evidence.  And they contain more of the minutiae of life, which is useful when you're studying people in unfamiliar contexts.
It struck me, reading this, that I hadn't paid enough attention to letters when reading about the lives of women in the nineteenth century.
The trouble is the word 'selected' in the book's title: you are limited to what this particular editor found important, interesting, or suitable for publication.  Of course, this is always the case in publishing historical texts.  I have somewhere Elizabeth Ham By Herself, the autobiography of the early nineteenth century writer.  In the introduction, the editor - Eric Gillett - wrote that 'it has been necessary to omit nearly fifty thousand words of almost maudlin self-pity and inconsequential gossip.  Although I do not consider that what is printed here constitutes a first-rate autobiography, it is a book consistently readable, with some most graphic descriptions, sharply etched portraits, and unusual glimpses of life in England'.  But what is inconsequential gossip to one person might be catnip to another: I'd love to know what he omitted.
In the case of Sydney Smith, his editor is particularly impressed (and rightly so) with his political independence and his criticism of the church within which he was himself a minister.  Smith was, furthermore, one of the founders of the Edinburgh Review, and continued to be seriously critical of its output long after moving on from its editorship.  He also moved to Yorkshire when the law changes to require clergymen to live in their parishes, despite the fact that 'no clergyman had resided in Folston for 150 years, and the parsonage was a hovel.  Smith's good-humoured acceptance of his fate - at a time when, fresh from his triumphs in Edinburgh, he was just beginning to take London by storm - seems a model of Christian humility.' (p.vii-viii) He does come across as having great integrity.
I would like to have known more about what appears to have been a very happy marriage.  I also enjoyed his sense of humour.  'Don't leave me in this odious state of innocence,' is his appeal for gossip. (p.100) And 'remember me to the Norton,' he writes to Lady Dufferin, referring to her sister, Lady Caroline.  'Tell her I am glad to be sheltered from her beauty by the insensibility of age; that I shall not live to see its decay, but die with that unfaded image before my eyes: but don't make a mistake, and deliver the message to –––––'. (p.211)
He was also prone to melancholy, and wrote to Lady Georgiana Morpeth with his 20 top tips for coping with low spirits.  These included (i) 'live as well as you dare'; (ii) 'go into the shower-bath with a small quantity of water at a temperature low enough to give you a slight sensation of cold'; (iii) 'amusing books'; (iv) 'short views of human life - not further than dinner or tea'; and (v) 'be as busy as you can'.  I'll take those - cold showers aside - and overall, it is difficult not to like Sydney Smith.  I'm not sure this selection of his letters makes the most thrilling reading, but perhaps - as noted above - it's just not in the nature of letter collections to be thrilling.  They are instead mundane, but comfortably, interestingly so. 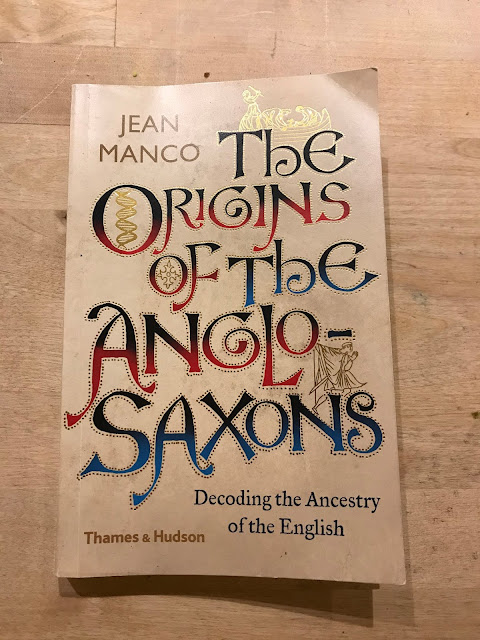 The Origins of the Anglo-Saxons: Decoding the Ancestry of the English, by Jean Manco, Thames & Hudson (2018).
This was a Christmas present.  The history books I buy are usually concerned with the nineteenth century.  Other than that, the Tudors have entertainment value; twentieth century history is useful in understanding what happens today; I love reading historical biographies and histories of certain bodies or concepts; the Anglo-Saxons... not quite so much.  I suppose what I find interesting in history is what people felt, how they perceived things, how they interacted on a personal basis, and these things become more difficult to ascertain the further you go back.
Nonetheless, there were things I found interesting.  I had no idea, for example, that there were ever Roman gladiatorial contests in Britan, and yet Manco discusses a cemetery uncovered in York: 'what is unusual about this one is the number of bodies that it contained that had been decapitated from behind at about the time of death, a pattern not found elsewhere in Roman Britain.  Taken together with evidence of other injuries, including large carnivore bite marks on one individual, this looks like the last resting place of gladiators.' (p.123) Wouldn't that make a fantastic starting point for a school history class discussion?
On the same page, there's a photograph of a really lovely bone figurine of a gladiator, found at Colchester, Essex - near where I live.  He looks very casual with one knee in the air.  I love historical dolls and figurines; maybe it's the teddy-bear maker in me; they say a lot about the way people see themselves.
There's a lot of information about the various groups that lived on the European mainland, and the trading of goods like amber and bronze, and how these goods found their way to Britain.  In some ways, it covers similar ground to Yuval Noah Harari's book, Sapiens - and it is interesting - only his narrative took a biological and evolutionary perspective.  Manco's is less driven.  She has a lot to say about DNA which, try as I might (it sounds like it should be a terribly interesting subject), I can't stay awake for.
Nonetheless, I feel like I should know more about Anglo-Saxon Britain - and about Roman Britain, living near Colchester as I do.  This book was definitely a kick in the right direction. 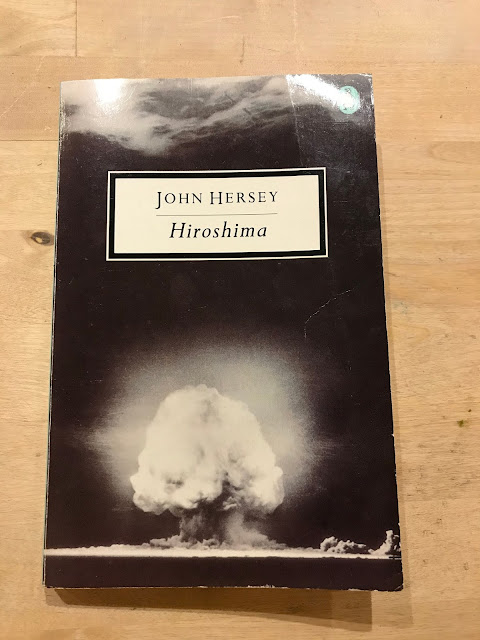 Hiroshima, by John Hersey, Penguin Books (1985).
Another novel experience.  I knew very little about the bombing of Hiroshima before reading this book.  In fact, I'm not sure I know much more having read it.  It's a sort of micro-history, focusing on six individuals: where they were when the bomb went off, their injuries, how they behaved in its immediate aftermath and, when Hersey returns to the subject 40 years later, how it affected their lives in the long term.
It's quite an intense read - an account of crisis management on the ground, as it were - without referencing the wider context.  It's not so much about the politics, as the way particular people lived through the experience.
Hersey's writing is dispassionate and lacking in personal presence, which I suppose should be good qualities in a piece of reportage.  I find it slightly troubling though: I prefer it when writers 'own up' to the methods they use to shape a narrative (and the way Hersey gathered his information is not mentioned once).  Nonetheless, the effect is - at least initially - militarily spare, perhaps providing particular clarity.
Does the book reveal anything about the kind of behaviour or thinking that works best in the aftermath of major disasters, when people are struggling with shock and confusion, personal injury, and uncertainty as to the safety of family members?
There are two individuals in Hersey's book that stood out for me in this respect.  Dr Terufumi Sasaki was one of the last doctors left standing at the Red Cross Hospital and was immediately faced with long, ever-growing queues of patients.  The second individual was Reverend Mr. Kiyoshi Tanimoto, a Methodist minister, who went about helping people and, in particular, ferrying them across the river to escape fires that broke out among the wreckage.  Both men were themselves substantially uninjured, held public service roles at the time of the disaster, and had no small children to look after and limit their autonomy.
It's strange reading the last part of the book, which explains what happens to the six individuals subsequently.  The two men who stand out in the first part continue their practical, high profile ways, but perhaps less sympathetically.  Sasaki goes on to a number of private medical initiatives, gets very rich (having been fairly well-off anyway) and takes little interest in the physical after-effects of the bomb.  At one point, he seems to seriously mis-diagnose the fractured vertibrae of Father Wilhelm Kleinsorge - another of Hersey's subjects. (p.152) Tanimoto becomes a sort of peace ambassador to the US, but is suspected of being more interested in self-promotion, and there is a baffling incident where he is found to have spent a significant sum, out of funds raised in America for the relief of Hiroshima orphans, on briefcases as gifts for the directors of the orphanages. (p.184)
Anyway, it's perhaps not a book about heroes, fallen or otherwise; in many respects it's about ordinary people, or ordinary lives (although odd references to the Emperor and the pursuit of 'total war' makes me question whether this is a society I would recognise as ordinary) blown apart in an instant.  It feels very odd that I don't know more about it; that I'm only just now reading this; one would have though it would be basic and essential reading.
Posted by Ruth at 18:33