When I first got the keys to my house, I thought 'one room at a time; first off: kitchen', but of course, there's always some waiting to be done between stages - waiting for stuff to arrive, or builders to arrive.  At some point, it was [gently] suggested to me that I might get on and paint something else while I'm engaged in said waiting(!)  So yesterday, I tackled the wallpaper in the dining room.  Naturally, it immediately turned into an enormous job! 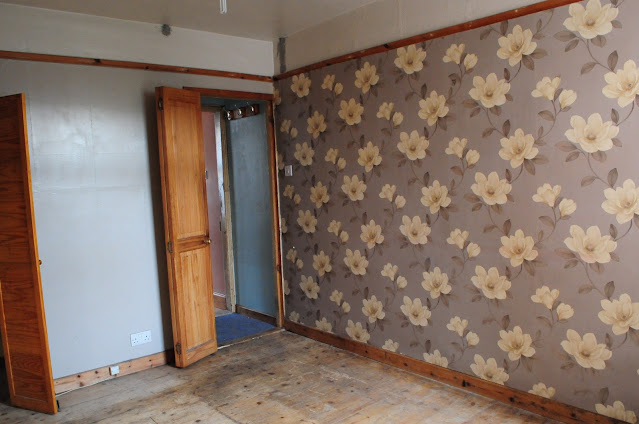 This is what it looked like before.  I don't think it's terrible, but it wouldn't be my choice, so I thought I might as well get rid of it.  It turned out it was covering polystyrene-backed lining paper.  There was no way to separate the floral wallpaper from the lining paper (no layer of paint in between), but the polystyrene is supposed to be dangerous anyway, so I took it all off.
It also turned out that what initially looked like a slab of plaster board or particle board (is that a thing?) or something underneath, was actually lime plaster!  This substantially survived my wallpaper-stripping efforts, but there were areas where bits crumbled and fell out. 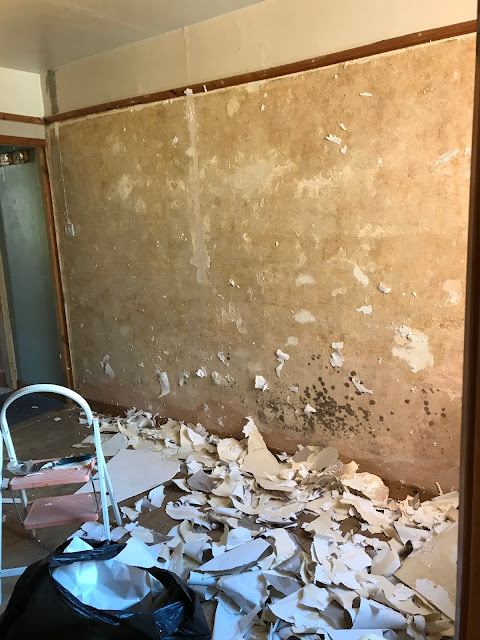 You can't really see the holes properly from here - but there are chunks of plaster missing.  I'm not sure whether to panic about this or not(!)
The other thing is, not only are there now holes in my lime plaster, but the surface itself isn't particularly smooth - like you'd get with gypsum plaster.  I'm not sure whether the lime is meant to be like this, or whether it needs some kind of finish.  I'm not going to put gypsum over the top, but is there an appropriate lime finish?  I don't think I've ever seen a finished lime plaster wall up close to inspect it.  (Next time I find myself in an old period building, I shall definitely be inspecting the walls closely!)
Weirdly, although it's a mess at the moment, I do think it's quite attractive in a rustic kind of way.
Having lime plastering done professionally is apparently phenomenally expensive, so my options will be, either to leave it au natural (and I'll be honest, I haven't yet warmed to the mould marks), at least until I can afford to have it done properly - which might not be for a few years. B and 2, fill in the holes as best I can with some kind of cheap filler, and reapply lining paper, then paint the wall, and hope it'll be alright.  C and 3, grab the bull by the horns and try lime plastering myself!
Given that a lot of actual plasterers who contribute to online forums and discussions boards seem to think that lime plastering is messy and difficult, the idea of doing it myself is probably laughable.  On the other hand, given how long it would take me to save up to have it done properly, I don't think I have anything to lose by trying.  It's not a major job, after all, just a few repairs.  And if it goes wrong, the house isn't going to fall down (hopefully).
Anyway, also yesterday the plumber came to shut off the water pipes in the kitchen and remove the old sink unit, and this morning I have ordered the new one.  Just the sink, and sink unit, with a bit of worktop to go over the top.  The rest will have to come later.
And I put up the bed I inherited.  First outing for my electric drill!  I am dead chuffed with it - and with the bed too(!)  The bed is rather larger than I expected.  It turns out that the little box room I wasn't sure what to do with will be needed for holding all other bedroom stuff apart from the bed. 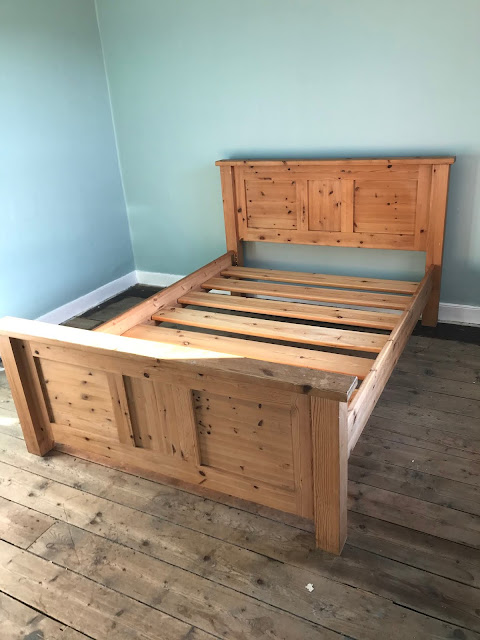 Anyway, today I have plans to demolish the sink unit, and take it home to be scrapped, and remove the polystyrene coving from the front room.  I'm hoping (please, please, please) that the wall will be alright underneath and it won't be another candidate for my non-existent lime plastering skills!  It would be nice to have one room to actually sit in while the rest of the house looks like a building site.
If the coving removal goes well, I shall get rid of the wall hooks and fill in the holes, and sugar soap ready to paint - woo hoo!

Hello! my friend , Amazing blog you have published. I get some valuable points regarding to Lime Plastering. Thank You for sharing a super blog.