Actually, it has happened once before. There was a Leonard who became a Leonora (after his teeth were knocked out for the third time, but that's another story), and now there's a Patsy who has become an Aiden! I'm referring to my teddy bears, of course.

Patsy was a little bear I made quite a while ago. As I remember, I was trying for a sort of plain, pretty, classic-teddy-bear look - perhaps something that I could introduce as a limited edition - making lots of them. She (now he) was made out of the cheapest mohair I could find at the time - although it is actually really lovely - a short-pile, honey-coloured mohair from Hembold.

Well anyway, for whatever reason, Patsy turned out to have enormous shoulders.

My mother, who can knit or sew anything for anyone, knitted a cute little green dress for her. It did little to disguise the enormous shoulders though.

And now, it must be almost a year down the line, and nobody has offered Patsy a home (sniff)! So, we decided that maybe she had actually been a boy all along - sadly miscast in a dress, miserable and misunderstood, crying out silently to those who passed her by, 'Come back! I'm not a masculine-looking girl-bear, I'm a boy-bear!" (The violins, please.)

So, she had the op yesterday. An operation carried out on my mother's sewing machine, to create a really cute pair of chequered dungarees, and a white shirt made out of an embroidered vintage handkerchief. The shirt does strain a little across the shoulders - but now she's a boy, we can pass that off as bulging muscle! (We did try that excuse when she was a girl-bear, but nobody found it cute then.)

I took a picture this morning, in the minus five minutes I had spare before I had to leave for work. Apologies for the poor quality: I still haven't got the hang of my camera yet.

First though, let me show you a picture of Patsy, when he was a she: 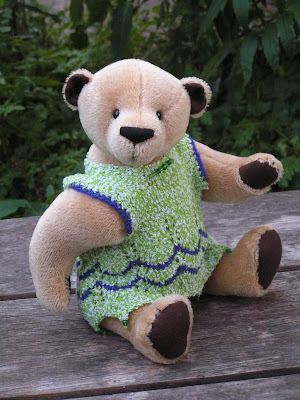 There she is - the shoulders cunningly disguised. You might just be able to see why I thought she made quite a sweet girl-bear. 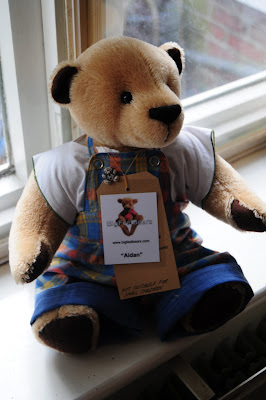 And here is Aiden, now he's a she. Isn't he lovely! Hopefully, someone else will thing so too, and offer him a good home sometime soon.
Posted by Ruth at 15:56