I really must try to be more imaginative with my titles.

I have been looking into having the things I make safety tested so that I can sell them as toys for children. Teddy bears for adults is a rather limited (but much appreciated!) market. 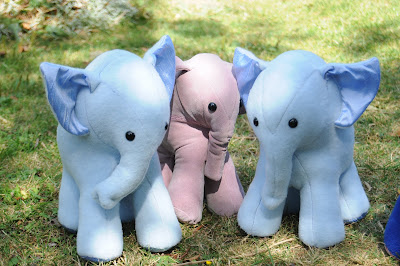 I was rather naive about this - imagining that I could have a small bunch of designs tested (six or seven, maybe) and then produce lots of them to fill up the unit nicely. In particular, I was thinking about my unjointed bears, elephants and rabbits like the strawberry rabbit on my first post - and my little block elephants (above).

So I got in touch with Trading Standards, and they directed me towards the list of bodies that are licenced to conduct tests for child safety. I contacted most of the listed bodies, showing them a picture of the strawberry rabbit, and asking how much the testing would cost.

Opinions differ as to how many tests would be needed. The basic test is on the physical and mechanical elements. Then they test for flammability; then for 'migration of certain elements'. They need to test coloured fabrics for Azo dyes, and the plastic components will each need to be tested for total cadmium and total phthalates.

The upshot of all this is that will cost upwards of £300 per design to have them tested! And if I were to have the design tested, and then make it up in a different fabric from that used in the tested sample, I would have to have the new one tested again, because of the dyes and flammability.

I understand completely that extensive tests are necessary - of course I do. It would be the most awful thing in the world if I were to make something and a child were harmed by it. The implications of such expensive testing however, are that you can't make soft toys for children unless you are prepared to have them manufactured in large numbers, and widely distributed.

I was wondering if maybe it would be possible to acquire fabrics, joints and eyes which come with some kind of certification that they are safe to use in children's toys. (You would have thought that something that is sold as a 'safety joint' or a 'safety eye' would have had to have been tested and certified as safe anyway.) If one were to do this with all the components of the toy, then perhaps the only test necessary would be the first one - dealing with the physical and mechanical elements. This costs between £60 and £100 - money which could probably be recovered through sales within a reasonable period of time.

At any rate, I was thinking about this and I'm sure I remember seeing things which seemed, at first glance, to be children's toys but which actually had a label saying "not a toy" or "not suitable for children". This might seem to be a solution to the problem. I was talking to someone from Trading Standards though, and apparently such labels are not conclusive - they would not protect you from liability if you were challenged. I can't give you the exact wording of the law, but the government-produced guide to the Toy (Safety) Regulations 1995 states that the test is whether the item was "designed or clearly intended for use in play by children".

I made three little cashmere "things" recently - bears, but very, very simply made - just two pieces of fabric sewn together and stuffed, with safety eyes, embroidered features and little applique patches on their stomachs. I thought it was a good idea at the time, but clearly its not going to work. 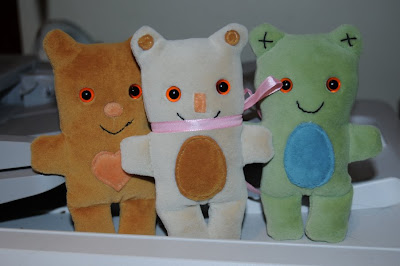 It was pointed out to me - by a friend who has children of her own - that in reality it is down to the parent, and the individual child. She has a six-year-old daughter, and said that she would probably be happy to give her daughter a bear with steel shot in it, because if the steel shot were to start coming out, she knew her daughter would tell her immediately.

I guess to some extent, an analogy would be little girls playing with their mother's high-heeled shoes - putting them on and walking round in them. It must be fraught with dangers (I can't put on a pair of heels without falling flat on my face!). In the final analysis, it is the parent who makes the decision about, and has responsibility for, what their child plays with - and so what's important, in a practical sense, is to make sure the parent knows that the item is unsuitable. I guess a parent might use their own judgment and decide that an item is okay for their child to play with, even if it labelled as "unsuitable for children" - so I guess I can see why such a label may not be sufficient to protect the crafter from liability. Really you need - not only to label the item as unsuitable - but also to say why it is unsuitable, so the parent can make an informed decision.

It is clearly a very difficult area. I will enquire into whether it is possible to buy materials which are guaranteed as safe - in order to meet the legal requirements and render the majority of the tests unnecessary - but I don't really hold out much hope. It looks as if I will have to confine myself to making things for adults.
Posted by Ruth at 17:45