I've just got back from the Art & Craft Centre - it was my day working on the desk. It is simultaneously nice and frustrating working there. On the one hand, it's great to sell stuff - even for other people - and it always inspires me to think about better ways of selling, and better things to sell. The frustrating part is coming up with 'brilliant ideas', and then being stuck there without any materials to hand with which to try out those ideas.

By the time I get home, not only am I completely exhausted by a day of unaccustomed social interaction, bu there are so many ideas flying about that I can't settle to do one thing. Usually, of course, I end up doing nothing.

Anyway, I guess recording said ideas would be a good place to start.

Here are some pictures of the unit I took a few weeks ago. I have changed things around since then, but my changes tend to involve just rearranging stuff, rather than doing anything radically new. 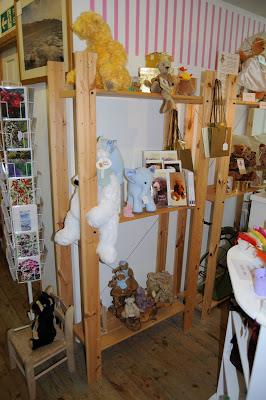 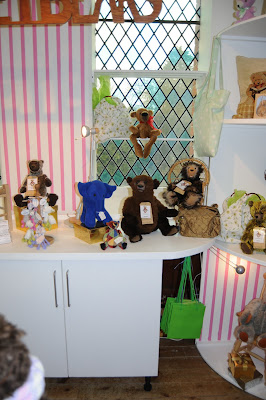 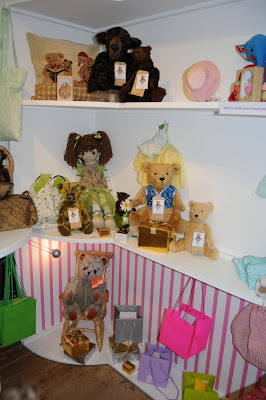 Apologies for the quality of the photos (I know you can't see a whole lot - but you can click on the photos for a better view).

Anyway, I was thinking today about what I could do with the display to improve sales (all suggestions welcome, naturally). When I first started out, and wasn't making enough to cover the rent, I used to say that that was okay - the unit was useful as a gallery space, even if I wasn't selling. It struck me though that in some ways, my unit still resembles gallery space more than it does retail space.

This, to my mind, is because the display isn't very interactive. The few signs that I do have (one in small print, explaining the process of making the bears, and one saying that they are not suitable for children) could be signs in a gallery or museum. They do little to promote selling. Also, the prices are on tiny labels and/or concealed. I guess when I set it up, I was a bit prudish about it - thinking that it would be a bit vulgar to have a big sign saying 'buy me!' with the price in large font.

I was thinking though that maybe that is exactly what I need - big, colourful (preferably hand-made) signs, advertising particular ranges of products, with prices in large print.

I do have a few 'price cards' - for the organza bags, for example (just visible on the far right of the first photo) - but even these are just boring fonts on plain white laminated card. I must be able to do better than that.

I have been looking at pictures of other people's craft fair displays on the internet. A lot of people do use plain white card - I guess clarity and readability is key - but there are some much more interesting ideas too. However, I can only think of one at the moment, and it isn't particularly earth-shattering. The lady was selling small items, which she displayed in little baskets, and the signs for each set of items was pegged onto the back of the basket, with a really colourful, retro-looking clothes peg! It looked better than it sounds - honest.

Anyway, I will leave you with a Youtube music clip (if I can get it to work). I heard this song for the first time on the radio today, whilst I was sitting at the desk at the Centre. There were no customers around, so I was bopping away to it. The only thing that prevented me from joining in with the chorus was the fact that my colleague was standing a couple of feet away, hanging pictures - out of sight, but not out of earshot.