Well, my mini bears are hardly proceeding apace. I have completed just one - a little polar bear based on the Steiff-inspired design for this bear. Incidentally, I named the latter bear 'Phut' and he has found a good home!

The mini version of Phut has turned out just as well, although - being all-white - he was incredibly difficult to photograph. Here are my best attempts... 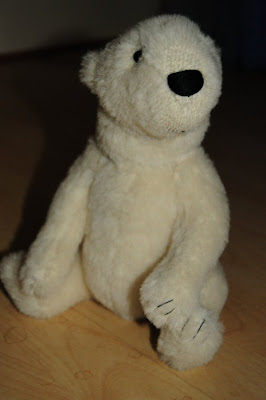 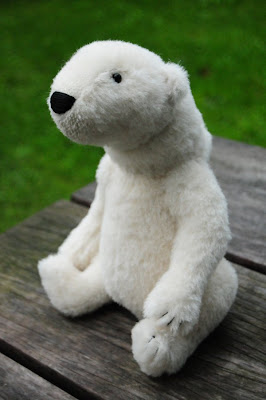 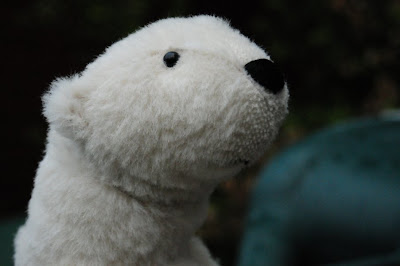 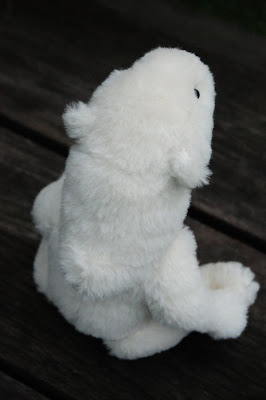 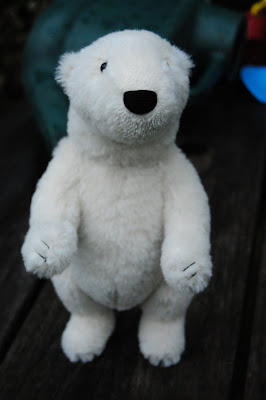 He does actually have an embroidered mouth - just about visible in the first and third pictures, but because he's looking up and the mouth is placed quite low, it is difficult to get both eyes and mouth in the same photograph.

He's not really all that mini - 11 inches from head to toe and about 9 inches in his natural sitting position. He's much smaller than the bears I usually make though, and to be honest, I like this size. I'm just not dextrous enough to be able to make teeny-tiny little bears: this is about as small as I can go without finding the whole thing so much of a faff that it's barely worth doing. It is reasonably small though - hopefully small enough and low enough in price to fit into the 'small souvenir I've bought for myself' bracket. I guess he will be around £40 (maybe not quite cheap enough then). The only way I can lower the price really is by making more of them, super-fast.

I am planning on making some more. I would really like to make a couple of very similar bears - simply so I can photograph them together. I make cards out of photos of my bears to sell at the arts & crafts centre, and there are often occasions where it would be nice to have two bears in the photos (Valentine's day?). My problem, I believe, is that I don't have such an easily-recogniseable style as many bear-makers do (I used to think this was a good thing, but now I'm not so sure), so my bears often look quite mismatched when photographed together.

Anyway, I would like to make several of these little polar bears - so I can photograph them together, and so I can display them together when the November fair comes around. Maybe a couple on all four feet; maybe one that stands up on his back feet...?

Only the second photo?! I kind of like the fourth one. For some reason this design looks particularly good from the top - I'm thinking a small note on the label to advise customers to view the bear this way x