I had an exhausting day yesterday - and I wasn't the only one... 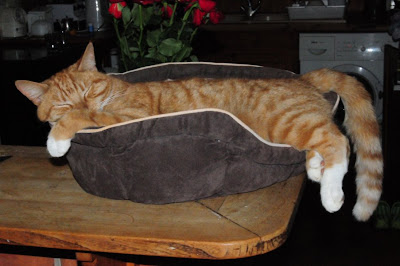 He's not himself at the moment. We think he might be suffering from arthritis after his accident: he seems very quiet and tired - either that, or in a blazing temper, snapping at everyone. Another trip to the vet is called for.

Yesterday, I went to the Art & Craft Centre to meet the couple who commissioned Emma (the second bear in this post). I was really nervous! I don't generally get to meet the people who buy my bears. I rarely sell them face to face: either people buy them through the website, or they sell at the Centre whilst I'm not there.

Anyway, I'm not quite sure what I was expecting, but they were lovely people, and it was really nice to talk to them. So I came home feeling as if it had been a good day - even having spent the morning struggling unsuccessfully with an elephant design.

Then, later on, I picked up an email saying "You have an order waiting for you." It was from Bear Pile - somebody wanted to order Vinnie! I was sure it was a joke, but I emailed back with a shipping quote, and another very lovely customer got back to me. So, this morning, I sent Vinnie on his way to Rhode Island, USA (sniff!).

In the meantime, I'm not making much progress with the actual creating. I have been trying to improve my elephant design. I have made some changes successfully, but I am struggling with the feet, and I'm not sure it's ever going to work out right. The trouble I have is that, when the legs are stuffed, the base of the foot curves outwards, which compromises the balance of the elephant.

When I made these bears, I managed to get them to stand fairly firmly. I put interfacing in the base of the foot to stiffen it. But they also had fairly short legs, which meant I could stuff them quite lightly to avoid the bottom of the foot curving, without that actually being a problem in itself.

Anyway, I can either persevere with the elephants, and maybe have nothing to show for this week, or I can put the elephants aside and start making bears quickly, to try to meet the two-bears-a-week target. It's really difficult: on the one hand, I really should be making more bears per year; on the other, I wouldn't like that to result in my making boring bears!

I have another project on the go at the moment too. At the Art & Craft Centre, myself and three of the other unit holders are going to get together and take on another unit, to run as a dress agency. In addition to the clothes that people bring in to sell, we will each have something of our own to sell there: my bit will be vintage clothing.

I am not great at vintage clothing: underwear I'd say I know something about now - but not general vintage clothing. I chose to do it because I have already tried the underwear at the Centre and, although I have sold a few pieces, it hasn't exactly been flying out.

Anyway, I guess in some ways, the principles are the same though: there are some similarities in style (or silhouette, at least), and the signs of age will be the same.

I have bought two books to help me research vintage clothing, and they arrived this morning... 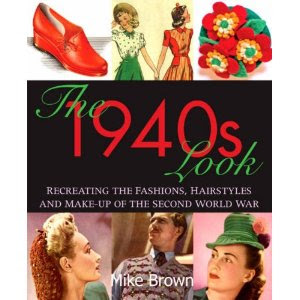 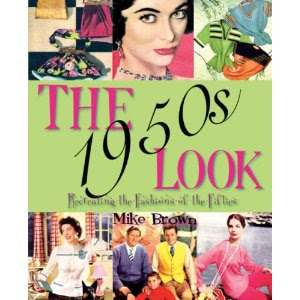 They are really lovely big colourful books; I'll let you know whether they are actually useful. At the moment, I have a lot of books piled up waiting to be read, but I guess these are a priority at the moment.
Posted by Ruth at 14:09