A long time ago, I started buying sad, weary old teddy bears on Ebay, with the intention of restoring them.  I've never tried to restore an old bear before but I figured that making bears myself should give me some kind of heads up.  Well, they all sat on a shelf for - oooh, it must have been at least a year, probably more like two or three.
I have been watching the blog of the lovely Polly - of Pud Bears and Friends.  Her own bears are lovely, but recently she has been showing some of the old mohair bears and dogs she has restored.  They are gorgeous!  Reading her discussions about it, and seeing what great results she gets, has given me a poke in the right direction.  I tried to pick a bear that needed quite simple repairs - Jarvis (who I think is a Chiltern).  He had a baggy, saggy body, and his limbs seemed to be almost completely without stuffing - they were just flat.  He also had holes to the paw pads of his hands, and his nose needed restitching.
I made several major mistakes along the way, unfortunately - one of which was that I forgot to take 'before' photographs.  Blast!  So all the pictures here are of him after my amateurish attempts at restoration.  You'll have to take my word for it that he looked much worse before! 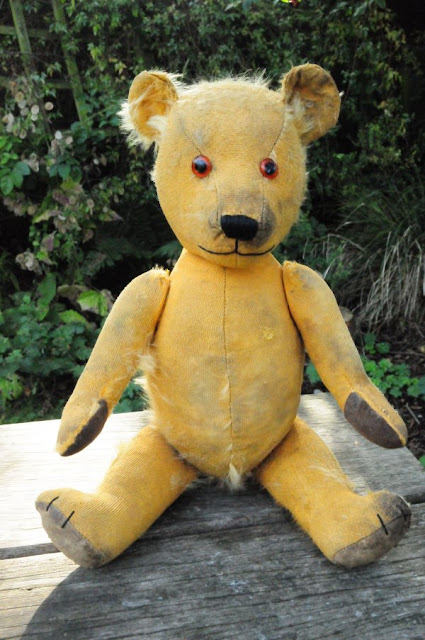 I started out by opening the seam at the back.  At some point in the past, it had come open and been quite badly resewn.  It looked like his body was originally filled with kapok - with wood wool at the top and base.  The wood wool was in quite good condition, but the kapok had completely disintegrated into billions of tiny, dusty little particles!  It was very difficult to get out, and someone knocked on the door midway, so I had to go and answer it with grey eyebrows! 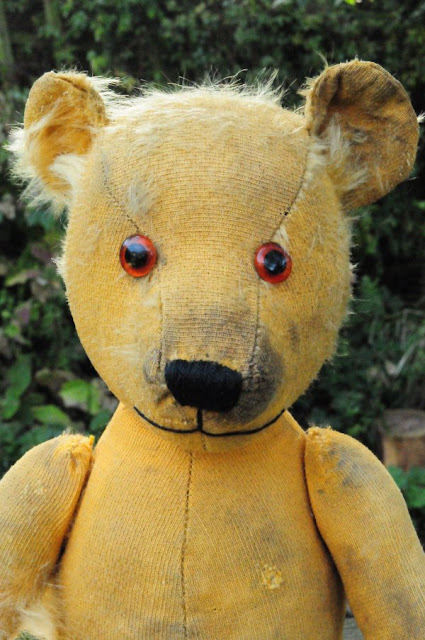 His joints were cotter pin, but made with long nails, bent into an 's' shape on the inside.  The hardboard disk looked rather worn, but I decided not to try to remove them, since I think that particularly type of joint (with the nail) dates him to a particular period in history.

Instead, I opened the top of the arms, removed the stuffing (another kapok nightmare, but with wood wool at the top of each limb), and then turned them as far inside out as I could, given the joint.  I removed the stitches holding the paw pad (weirdly, they seemed quite sticky - something like beeswax, or just age?), traced the shape of the pad and then cut a new one in dark brown plush fabric.  Re-sew, turn right side out, fill with polyester stuffing, and ladder stitch the top. 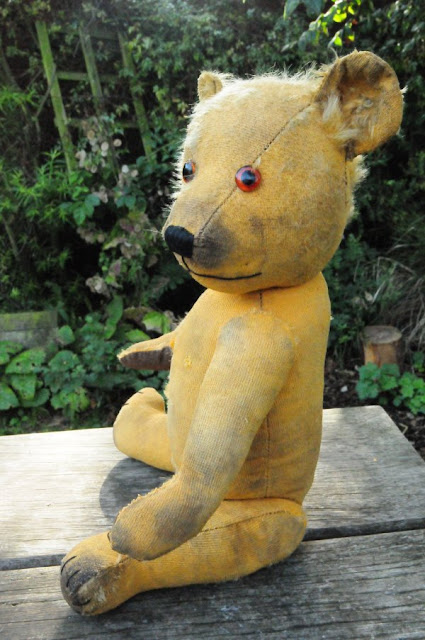 I'm a little worried about this. The paw pads - in addition to the holes - were faded almost white. I have read somewhere though that you should just patch the holes - leaving the original in place. It makes sense: obviously if you take out all his original features, he will lose much of his vintage charm. In this case though, I do think the paw pads were too far gone to patch. 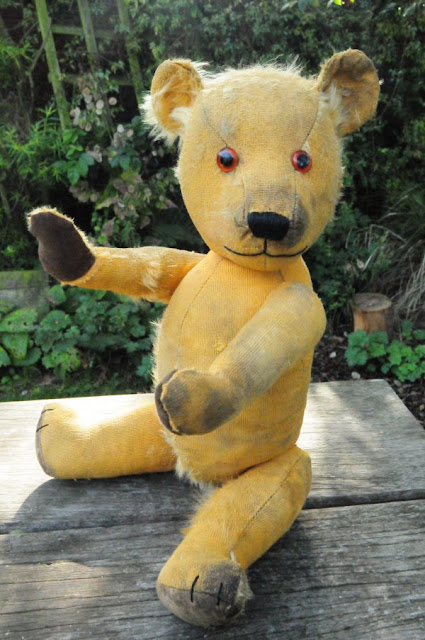 I made a big mistake with the paw pads to the hands. There was a hole to the back of one hand, and since it was right near the edge and I didn't have anything to patch it with, I decided to simply sew round the hole. The result is that it looks like he has a bite out of one paw - poor thing! Note to self: always patch the holes. 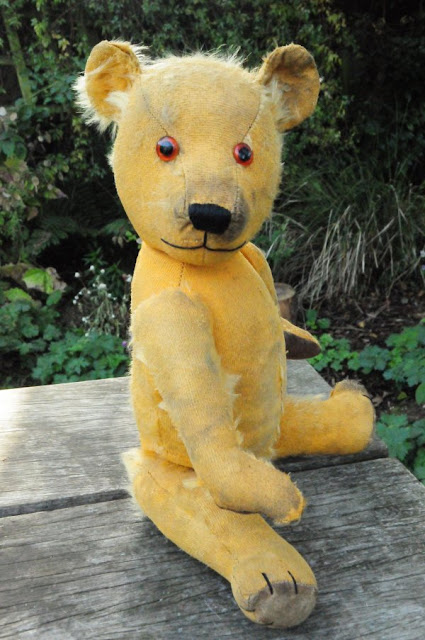 His legs were also baggy and flat, so I changed their stuffing too.  I decided not to redo his foot pads - they are faded, but with no holes.  Interestingly, his legs are cut completely flat at the top, and the corners are just tucked in when the seam is closed. 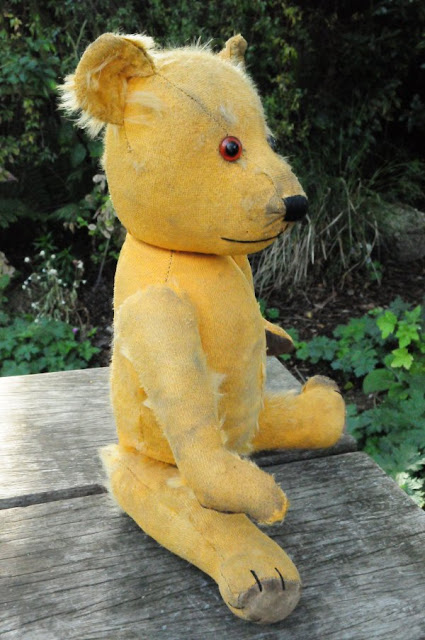 Another strange feature was that, in his back, just above the open seam, there were a number of threads, criss-crossing back and forth over the seam, with long trailing ends dangling into the body. The ends were not attached to anything, but when I opened the arm and leg seams, there were further trailing threads, so I'm thinking the threads started at the back of neck and were threaded through to each of the limbs. Erm... why? I haven't quite figured this one out yet - if anyone has any suggestions, let me know. 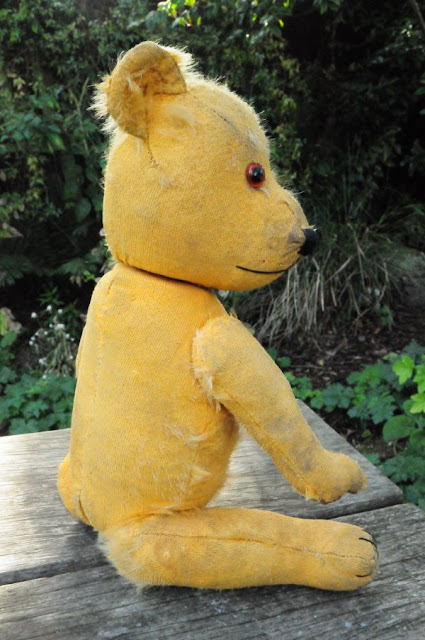 Anyway, I restuffed the body and limbs, and sewed up all the openings. I resewed a hole in his bottom seam(!) and then noticed a little hole to his chest - not on the seam. Note to self: always patch holes. 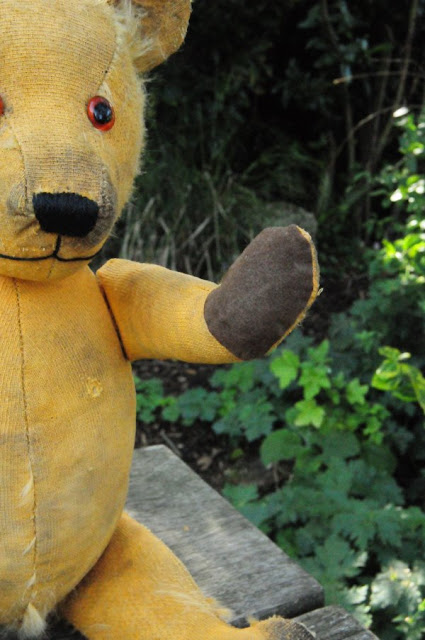 His nose was a bit of a mess, so I decided to remove that before putting on a new one. That, I think, was another mistake. Not only was it really difficult to remove, leaving big holes, but it was very difficult to restitch. I started out with thick black wood, but that looked far too ungainly. Then I tried a black felt template sewn on - over which I was going to stitch in ordinary Perle cotton. No matter how much I tried though, I could not get the shape of the template right.
Eventually I just embroidered it in Perle cotton. It is a little wonky (I don't usually embroidered my bears' noses), and I think it should be a little taller - from top to bottom - but it's not too far away from the original. If I do this again, I think I will leave the remenants of the original nose in place, and simply stitch over it. 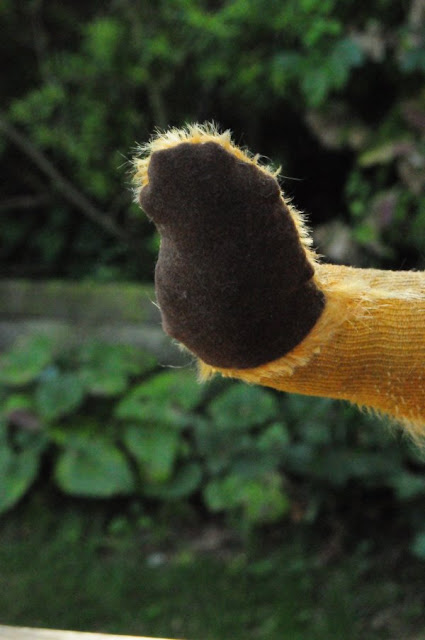 I then tried to give him a bath. I think with mohair, you're meant to stick to surface washing, but he was (is) quite grubby, so I practically soaked him, with a cloth. I used washing up liquid and tried scrubbing him lightly with an old tooth brush. As far as the actual fabric goes, it wasn't successful - those stains won't shift. His last remenants of fur though came up as a lovely fluffy blonde fuzz! 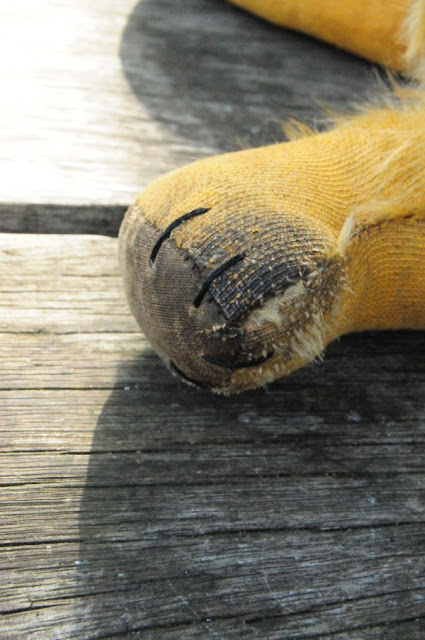 So I think that's about it. One of his ears is coming out of the head seam slightly, so I will sew that down. I'm also considering a little patch to the hole on his chest. My mother has promised to knit him a cardigan - since clothes are meant to be one of the best ways of preserving old bears. 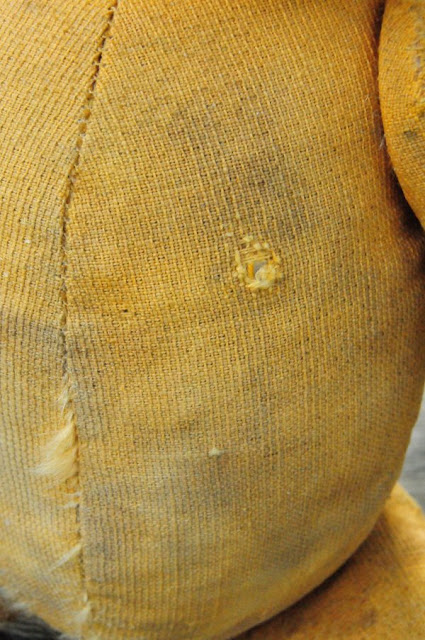 Another concern I had about this was stuffing him with polyester.  It seems rather inauthentic.  However, the alternative would have been kapok - which presumably would have disintegrated again at some point.  I could have replaced the wood wool, but I didn't.  On the one hand, I think the soft polyester is far more forgiving to the vintage fabric (he's an old man now - he deserves to be able to relax a little bit!); on the other hand, again, the wood wool would be far more authentic.  I don't know. 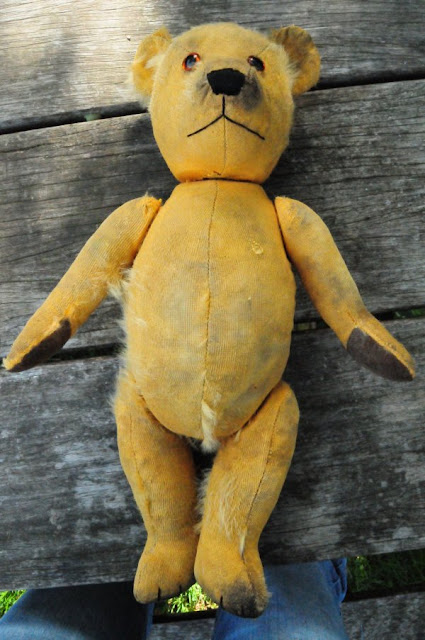 I do think that I've managed to retain his original character though.  He may not look - without the 'before' pics - as if he's had much done, but in some ways that's a good thing.  It would be unfortunate if he looked completely different at the end of the entire process.
Once his jumper is finished, I will list him on Ebay to see if anyone's interested.  Hopefully I can explain everything I've done to him much more briefly there!
Posted by Ruth at 11:21