Ooh - I am using the new Blogger interface!  So far so good...  When I tried to access the blog this evening, it told me I needed to update my browser (Safari).  No Safari updates were available through the App Store.  I tried installing a new operating system (just out of desperation) - which doesn't seem to have worked(?) - not sure!  The only other possibility I could find was to install a different browser - at which point I discovered that I already had Google Chrome in My Applications.  When I open Google Chrome, I don't seem to have any problems with the new Blogger interface.

Anyway.  I am deeply ensconced in Frank Muir's The Oxford Book of Humorous Prose, and I've got a way to go (large book) so it'll be a while before I'm back writing about books.  I thought instead, I'd post about some recent sewing projects - one [reasonably] successful; one not.  To the latter first, I tried this pattern - which I think came with the Simply Sewing magazine... 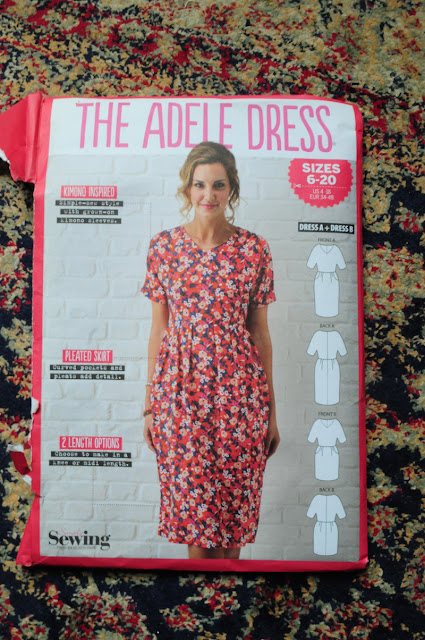 I will spare you the pictures of what I made (in fact, the results were so depressing, I don't think I took any pictures).  The dress looks so nice on the model, I didn't notice that the skirt part of it is of a design which doesn't usually do me any favours.  Anything fitted at the top end but not at the bottom end always looks like a sack of potatoes on me.  (I can only conclude my bottom end needs all the fitting help it can get.)
However, I did like the bodice of the dress, which is a bit batwing-like in style, so I decided to see if i could extend the bodice and turn it into a t.shirt.  It moreorless worked - after a few tries. 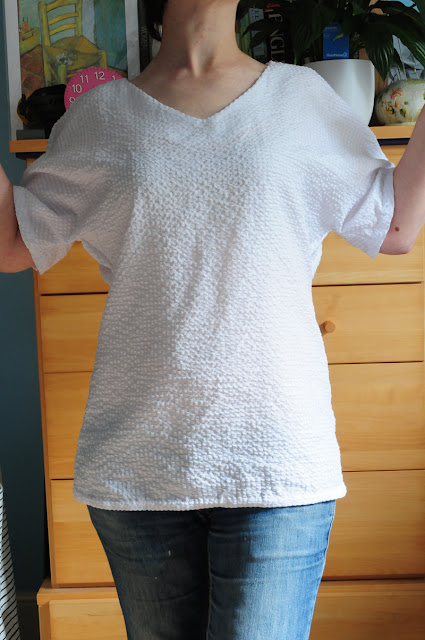 It does feel a little weird: although it's not tight around the hips, it's closer fitting there than around the bodice, which feels upside down to me.  I suppose I could have made it wider at the hips, but I didn't want to mess with the shape too much and lose the batwing thing.  I also wasn't very keen on the neckline.  It's quite wide, so it keeps teetering on the edge of one shoulder or the other.  And if I'm not sitting poker-straight, it sort of blouses out.  Every time time I look down, I'm looking at my own belly button through the open neckline of the top (very disconcerting).
Another unsuccessful aspect is the fabric.  When I made the toile of the dress, I had cut the bodice out of a remnant of white cotton seersucker - which was absolutely lovely!  But I didn't have enough of it to make a t.shirt.  When I looked around for it online, it turns out white cotton seersucker is as rare as hen's teeth - and rather expensive - so I ended up buying a polyester/cotton mix, which is not the same.  It is papery.  And it itches.  Or maybe that was just the general irritation I was feeling with the entire thing.
Anyway, I'll launder it and send it off to the charity shop to see if anyone else likes it.
My second project was a jacket.  I've never liked wearing jackets - they make me feel wide - but, perhaps for that reason, I've always hoped I could find one I liked.  This one - Vogue 9336 - looks a bit longer than usual, and quite fitted, so I thought maybe it would work. 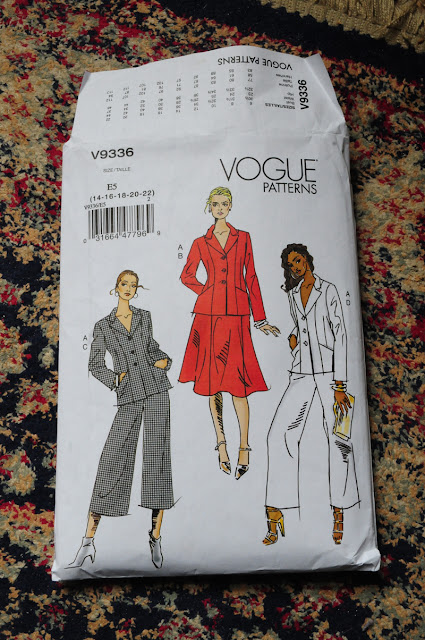 Turns out it's not all that long after all - maybe it's just my long torso.  I guess I should have added a few inches to the length, like I usually do. 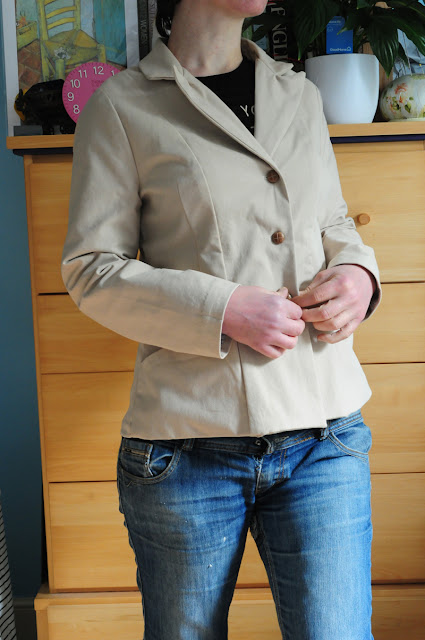 I made the jacket out of the same fabric as the cream trousers (which I still think are wonderful - albeit not flattering in photographs).  It's a stretch cotton twill from Fabworks, and I highly recommend their customer service because when I found I didn't have quite enough fabric, and it was out of stock, they were wonderful, and prompt, and friendly, about finding me some more.
It's lined in a blue stripe fabric which my mother inherited from someone.  I think it's just a high thread-count cotton, but whatever, it's gorgeous.  As with the yellow dress I made, I'd happily wear this inside out.  I think it's just linings though... clothes with linings feel so much nicer.  This jacket feels really substantial, almost like a coat. 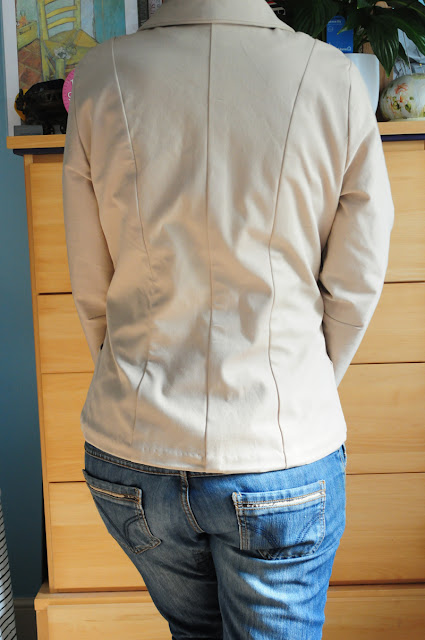 I'm less certain about the jacket and trousers together(!)  I guess people who wear suits do this all the time - same colour top and bottom - but it feels a bit 'double-denim' to me - a bit OTT. 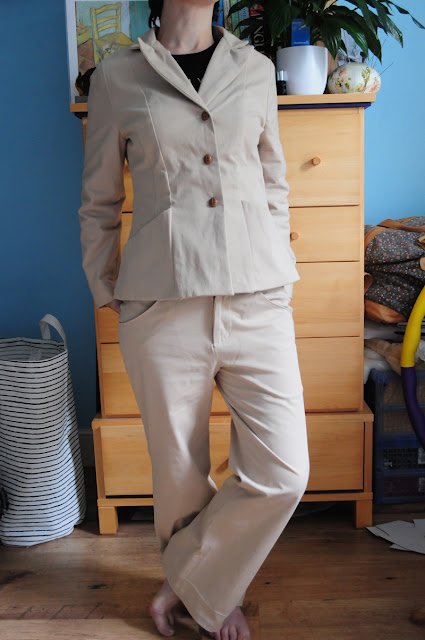 Anyway, the pattern is marked 'Easy' and it was quite simple to put together.  The bits I found tricky were blind stitching the pockets (I gave up in the end); attaching the lining (it wasn't altogether clear which bit you left open for turning - although I guess if you've ever seen or been through the process before, you wouldn't need to be told); and the lapels, which are not  quite as neat as they should be.
As far as alterations went, I omitted the shoulder pads, and took a bit off the shoulders to compensate.  I also took it in just a little at the back.  I'm not quite sure whether that was the right thing to do or not: it is fairly close-fitting.  I did it because it's a stretch fabric and when I made the trousers, I had to take them in a little.  Anyway, the jacket feels perfectly comfortable. 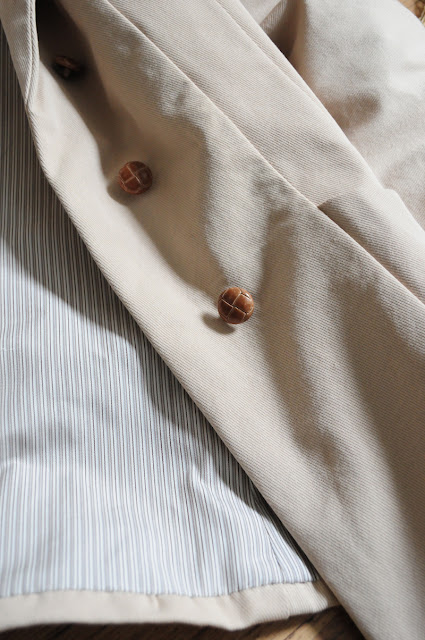 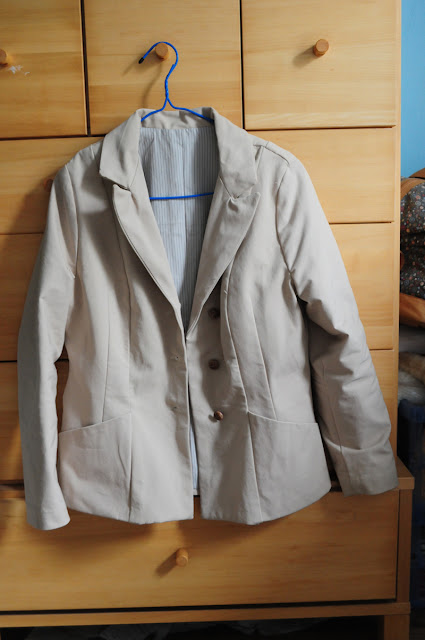 Hopefully I will actually wear it sometime - although to be honest, the fact that I get it out and put it on every now and then makes me count it as a success.  I may never have an occasion to wear a cream jacket, but at least I managed to make one that I'd want to wear.
Posted by Ruth at 20:35