One of the problems I'm finding - in blogging about the making of something which I sell also - is whether to be frank about how I see a bear, or whether I should be enthusing about him/her - just in case a potential customer is reading.

As you will no doubt have found, I do enthuse wildly about a lot of my bears - but then, when a bear turns out well, that enthusiasm is entirely genuine: I am just an over-enthusiastic person.

When it comes to the flawed bears though, I can be over-pessimistic.

Anyway, this is the specimen under discussion... 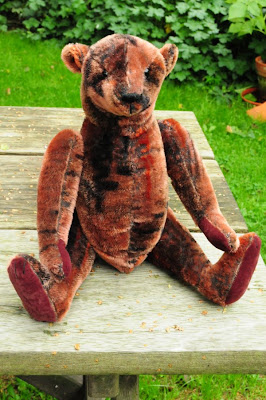 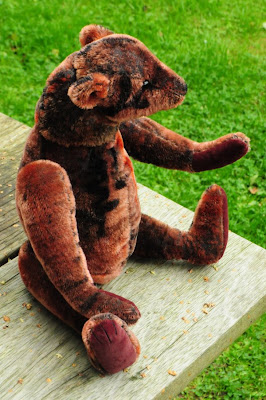 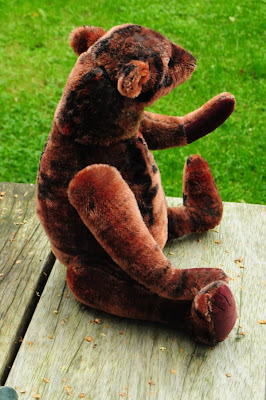 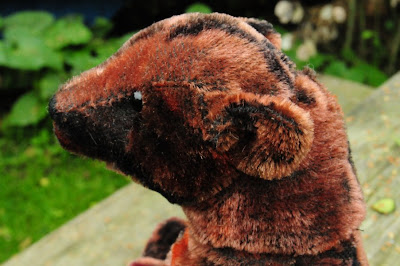 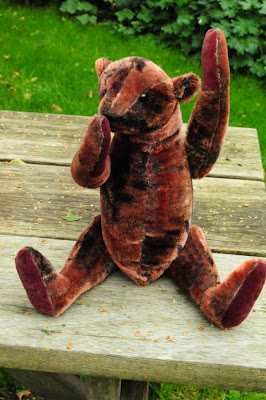 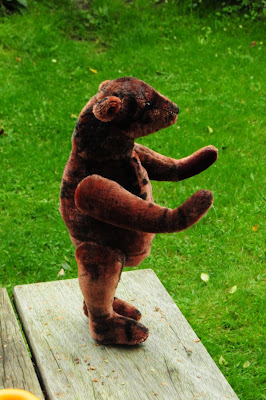 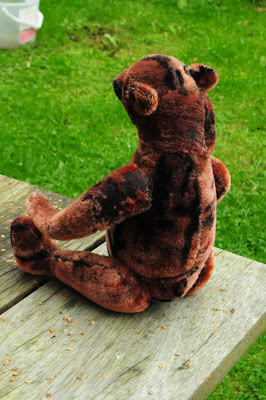 You might notice that most of the pictures are taken from the side. That's because I do actually like him from that perspective. He has a nice silhouette, I think.

The problem is that he's all lumpy and bumpy.

He is made out of the most gorgeous antique German mohair (I can be enthusiastic about that, at least). It is dark red and has large black motifs all over it - like some sort of Chinese script. It was incredibly difficult to work with though. The backing is much thicker than that of ordinary mohair and it frays terribly. I could have used fray-check, but that tends to make the fabric stiff, and it was difficult enough to get a needle through anyway.

When I was making the double neck joint, the seams are so thick and solid that they don't sit flat over the wooden joint discs.

When I was sewing the pawpads, I didn't clip the curves - there was so much fraying going on, if I'd weakened it any further the whole thing would have fallen apart. As a result, when I turned the limbs right side out, the curves were uneven.

The ears are extremely fragile because the seam allowance has to be tiny.

The nose was a nightmare - since it comes on top of a particular concentration of seams, and the fabric is thick anyway, I could barely get the needle through it.

It was like making a bear out of a bit of old carpet.

And - to top it all off - in such a small bear, that beautiful black pattern all but disappears. There is a slight hint of it, on his back, but otherwise, it has gone forever.

I have a couple more pieces of antique mohair (no in the same pattern, unfortunately), but I don't think I shall be using them. Not for bears anyway. This one was a pain in the rear end to make - he took ages, and much angst was spilled (does one spill angst?), but the poor finish makes him look like something I knocked out in a hour, whilst drunk.

Actually, i think he has a sort of upmarket brindle look. The print may have been different in one piece but it's also quite effective in 3D. And he has no shoulder hump! That's quite an interesting look too. Are you going to try selling him?

You don't like the humps? They do work well on realistic bears, but as you say, perhaps not on character bears or antique-look bears. Having said that, many of the antique Steiff bears have humps. I am really not sure what to do with this one - he'll probably just sit around at home for the next couple of months x