Apologies for the photos being a bit dark - I finished her around 4 o'clock and rushed outside, thinking I could just get some pictures before it turned completely black. So, everything's a little dim. 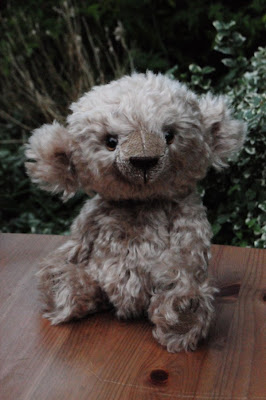 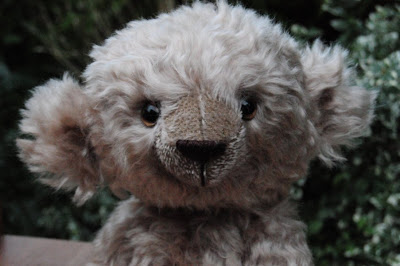 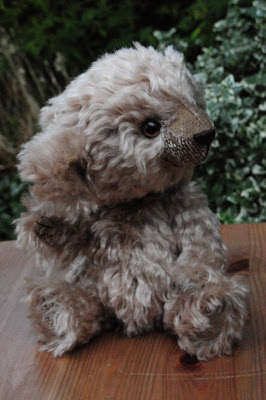 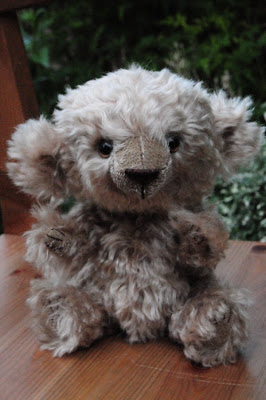 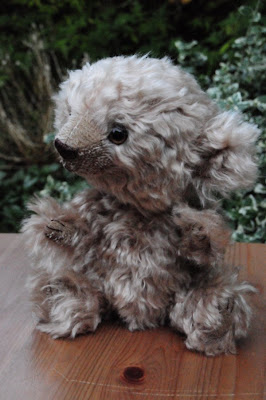 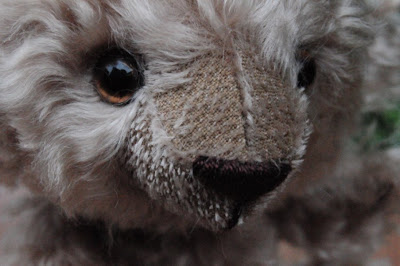 I bought this mohair on Ebay years ago, and it is absolutely gorgeous: it has a natural 'kink' to it. Unfortunately it was quite long, and there was only a small piece of it (about 1/8th of a metre). The problem with making small bears out of long pile mohair is that they tend to look really scruffy, so it has lain in my mohair box for ages - much stroked, but never actually put to any use.

With these little amurgurumi style bears though, scruffiness seems to be the order of the day, so I decided to bite the bullet and use it.

Cordelia is a bit bigger than the others bears I have made in this design, and - having sewn all the pieces, and stuffed them, I almost abandoned her there. She had a massive heavy head and a miniscule body (this was before I'd shaved the muzzle - which did make a big difference to the proportions) that didn't look as if it would be able to hold her up.

However (note to any readers who are thinking about making a bear for the first time): a feeling of panic which strikes upon the initial stages of assembling the bear is quite normal(!) Do not be fooled into giving up - the bear will look immeasurably better with all its facial features.

A long time ago, I read an interview with Christine Pike - who makes the most beautiful bears - and she said that before she puts the noses on, her bears look really strange - not like bears at all. Somehow you just have to hold on to your nerve through the early stages of the bear (I'm making it sound really epic now), and keep believing it's going to turn out alright.

Of course, sometimes it still turns out terribly - and that's the worst part.

Anyway, I am happy with Cordelia! And I am quite chuffed with the rate of my output of bears recently. The only thing giving me cause for concern is the display, for this craft fair. I have made tentative (and incomplete) attempts to create a backboard - which in hinged like a dressing screen(?) and is able to stand on its own by virtue of that fact. However, my mother thinks that such a tall screen will stand out like a sore thumb, and prevent people on the other side of the room from being able to look over and see the bears.

I can understand that - but I really don't want to turn up at the fair with my usual random collection of bears balanced on cardboard boxes.