Phew. Well, that's that over with.

I'll start with the positives. I mentioned in my last post that I would ask my mother to paint the backboard for me - and look how it turned out! 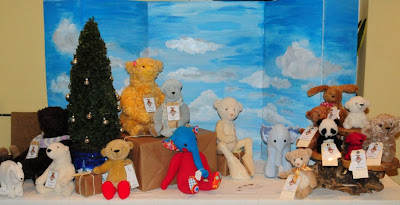 If you click on the picture, you should be able to get a closer look at it. It's a really lovely painting of a cloudy sky. Certainly, this is the best my table at a craft/teddy bear fayre has ever looked. I think the backboard has a lot to do with that - and also the little stand for the mini bears, which we bought from Wildthings (see here), at another local craft fayre. If you click on the link for 'rustic furniture' on their website, you will find the teddy bear stands.

The footfall seemed quite high - I was surprised: when they opened the doors, everyone came in in a rush. It's nice to see a bit of excitement at these events.

With regard to the other stalls, the Wildlife Trust was next to me selling books - and they seemed to be reasonably busy; then there was a guy on my other side selling beer - and he was very busy. I'll let you know how the beer goes down later (burp). There was meat stall, run by a local butcher, a stall selling home-made apple juice, and a cupcake stand. I can't remember the name unfortunately, but the cakes were lovely.

Um... stalls selling jewellry, knitted toys and scarves, hand-made cards and gift boxes, plants, wreaths and floral arrangements, candles, pottery, and painted name signs. There was also someone selling commercial greetings cards, someone selling antiques (mostly wooden tools, I think), and a raffle. So there was quite a good mix of things - and they did well in keeping it predominantly hand-made.

And the negatives - well, I didn't sell any bears. I think my bears must have had the highest prices there. Even the jewellry wasn't priced any higher than about £15 for a necklace. I did feel slightly awkward about it - although I stand by my prices all the same.

It also reinforced for me that I'm not really the right person to sell at craft fairs. I remember now the feeling of mute anxiety - practically hiding under the table to ensure I don't have to actually talk to anyone. And it only takes a few people to step forward, saying, "Oh that's nice; how much is.... FIFTY POUNDS FOR A TEDDY BEAR!?" and any confidence I had is gone.

I think possibly if you're selling expensive collector's teddy bears, you either need to be selling at a bear fair - where all the bears there are of comparable price, and the customers are collectors who have some idea of what it costs to make a bear - or you just need to give it time, as I've done at the Art & Craft Centre. A single day (or in this case, a couple of hours) at a craft fayre doesn't really give people time to get over their initial astonishment.

Also - and again, I found this at the Art & Craft Centre - people assume that you're selling bears for children. In the couple of conversations I had with people, they all referred casually to their children, or their grandchildren -the concept of bears for adults seems to be utterly alien to a lot of people.

As you might be able to tell, I'm struggling not to be too down-hearted about the whole thing. I'm not particularly eager to do another fayre but - trying to think about it sensibly - I guess if I can find somewhere where the prices are either comparable to mine, or higher, I might stand a better chance of finding homes for bears.

The way I'm feeling at the moment though, I might just leave them there with an honesty box(!)

Bless you, that sounds about the same experiences I have had at craft fairs. I don't think they are really the place for mohair artist bears.

On the one hand, I'm really glad to hear you say that. On the other hand.... oh no, don't say that! I have another craft fair booked for July!