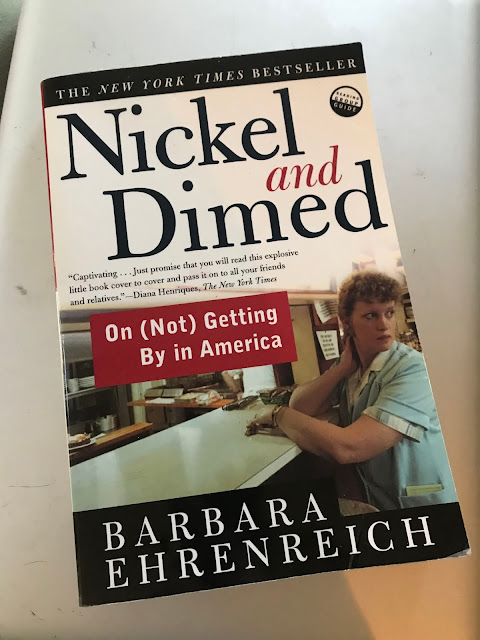 Nickel and Dimed: On (Not) Getting By in America, by Barbara Ehrenreich, A Metropolitan/Owl Book (2002).
Barbara Ehrenreich does the whole George Orwell, Down and Out in Paris and London thing - casting off a life of relative comfort and security, and travelling to a new town to throw herself into the lower end of the job market and find out how people survive.  She works as a waitress and housekeeper in Florida (two jobs are necessary if she is to afford to live in the cheapest accomodation), a cleaner and nursing home assistant in Maine, and at Wal-Mart in Minnesota (the way Wal-Mart schedules its shifts prevents committing to a second job).
Her conclusions (this was published 20 years ago) are that it is incredibly difficult, near-on impossible, for even the most hard-working, well-equipped person to stay afloat in America when they're poor.  Poverty now isn't so much about people being unemployed, as people who are in work but paid too little to live on.  Low wages are combined with a dearth of affordable housing and unionisation is resisted (even informally penalised).  As a result, living and working conditions are rubbish and there is little chance of the labour force pushing for improvement or 'voting with their feet'.
It is a terrifyingly entrenched inequality.  The oppressive atmosphere of the book is partly relieved by the knowledge that Ehrenreich herself is not stuck in this world; partly also by her sense of humour.
I've done similar jobs to those described here, although never (yet) in such constrained circumstances, thankfully, and repeatedly her observations rang bells for me.  Her description of the final straw when she was working as a waitress made me laugh - perhaps inappropriately; I'm sure it was anything but funny at the time.  After a bad start to her shift, with a busy restaurant and lots of particularly picky customers, 'much of what happens next is lost in the fog of war.  Jesus [the chef] starts going under.  The little printer in front of him is spewing out orders faster than he can rip them off, much less produce the meals.  A menacing restlessness rises from the tables, all of which are full.  Even the invincible Ellen is ashen from stress.' (p.47) I remember those days.
She records the anxiety of constant job searching and working with new people; the ridiculous application questionnaires ('do I work well with others?  You bet, but never to the point where I would hesitate to inform on them for the slightest infraction.  Am I capable of independent decision making?  Oh yes, but I know better than to let this capacity interfere with a slavish obedience to orders'. (p.59) I completed a few of these; I failed them every time); the flattening effect of being reduced to a set of menial skills - one person among a million needy, interchangeable others.
Once ensconced, she notes the boredom of the menial job.  'I could use some amusement.  I have been discovering a great truth about low-wage work and probably a lot of medium-wage work, too - that nothing happens, or rather the same thing always happens, which amounts, day after day, to nothing.'  And 'how did I think I was going to survive in a factory, where each minute is identical to the next one, and not just each day?' (p.186) This isn't as whimsical as it may sound out of context.  I remember working on assembly lines during college holidays.  I was glad for the money, but the job was mind-numbingly boring, and after being on my feet all day, I had no energy to search for anything better.  I can't think of anything I wouldn't rather do.
Ehrenreich also talks about the strange kind of mentality one comes to have in such situations.  'If you hump away at menial jobs 360-plus days a year, does some kind of repetitive injury of the spirit set in..? I can guess that one of the symptoms is a bad case of tunnel vision.  Work fills the landscape; coworkers swell to the size of family members or serious foes.  Slights loom large, and a reprimand can reverberate into the night.' (p.106) It affects the way you behave towards other people.  After a minor but bad-tempered exchange with a new colleague, she says, 'I leave that night shaken... Am I turning mean here, and is that a normal response to the end of a nine-hour shift?... This is not me, at least not any version of me I'd like to spend much time with'. (p.168)  I've left at least one job on the basis that it was turning me into something I didn't want to be - not just harder and more thoughtless, but small-minded - so this is a familiar sentiment.
As might be apparent, I loved this book - partly for the gritty, unglamorous, realness of it all - but also because I think Ehrenreich found a great stance to report from.  I imagine that books actually written by people trapped in low wage jobs are uncommon, and would make difficult reading.  Books about this kind of work, written from a privileged viewpoint, are often quite dry and tedious.  Ehrenreich, whilst no doubt privileged herself (a point she frequently acknowledges and reflects on), goes all out to find a position which allows her to speak with some level of experience and therefore moral authority, whilst at the same time retaining a separation from her subject, and the objectivity with which to speak of it. 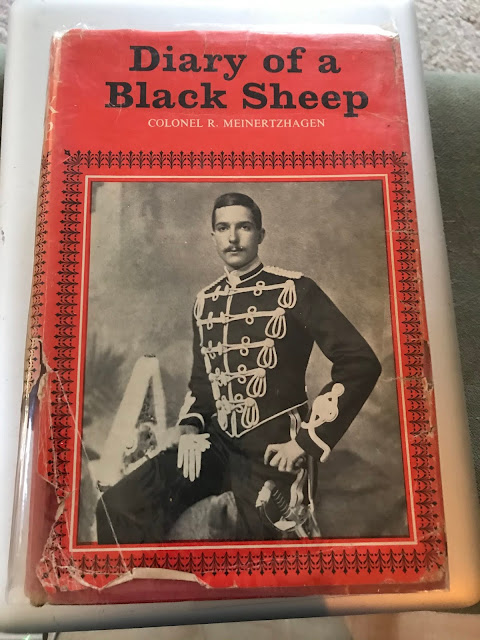 Diary of a Black Sheep, by Richard Meinertzhagen, Oliver & Boyd (1964).
Richard Meinertzhagen was a nephew of Beatrice Webb.  I first met him in Barbara Caine's fabulous book, Destined to be Wives: The Sisters of Beatrice Webb.  Theirs was a fascinating family, which had its share of tragedy - not least the troubled relationship between Richard and his mother - Webb's sister, Georgina.  Georgina had married Daniel Meinertzhagen, a banker, and had ten children.  They lived at Rutland Gate, in London's Knightsbridge, and at the gargantuan Mottisfont Abbey in Hampshire.
It does not seem to have been a happy marriage.  Richard's father was quiet, hard-working, and apparently not particularly intellectual.  His mother came from a more precociously academic family and she herself was quite a character.  Meinertzhagen quotes from a letter she wrote to her 13 year old sister, Margaret, when she herself was 20: 'Now for an answer to your saucy, inappropriate and shabby little epistle, which arrived on my birthday.  Your proverb was no proverb but only the invention of a diseased imagination...  Allow me to assure you that I glory in a state of tall, picturesque angularity, and shall be seriously grieved when old age lowers me to your state of stumpy embonpoint.  I shall truly then have had my day, and I hope my brain may not contract with my body.' (p.76)
Nonetheless, she must have had a lot on her plate with so many children and two such enormous properties to manage.  Richard Meinertzhagen apparently spent his childhood longing for a maternal affection which was not forthcoming.  Most damningly of all for Georgina, he was repeatedly beaten at boarding school and, amid all the terrible evidence of bruising, welted legs and blood-stained clothing, she tells him he should try to behave himself. (p.159-161)
But he survived and, beyond these horrors, his childhood was incredibly privileged - not least in that he had the run of Mottisfont Abbey.  He and his siblings took full advantage of the enormous resources available to them.  He insists, at the beginning of the book, that he never killed animals for sport; nonetheless, vast numbers of birds and animals die at his hands before the final page.  After the horrors of Fonthill school, he went on to better experiences at Harrow, then dodged his father's attempts to recruit him into banking, and joined the army.
The book is picturesque - often seemingly exhaustive in its collection of random childhood memories, and listed descriptions of country traditions, his tutors at Harrow, his parents' famous friends.  Meinertzhagen paints a vivid, and in many ways affectionate, picture of an upper-class childhood in the late Victorian, early Edwardian eras.
Nonetheless, there is a rather strange side to it.  He himself is an uncomfortable reminder of what Britain has been.  The book was published in the early 1960s, and he clearly wished, in some respects, to show himself as a progressive - arguing, for example, that he'd never seen women as anything less than equal to men - and yet he was an imperialist, an admirer of Cecil Rhodes, and apparently found little to dispute in the eugenicist ideas that had been around for much of his life.
A while ago, I read Treasure Island, and I remember saying something silly to the effect that, despite the bloodiness of British imperialism, the utter lack of self-doubt involved produced an appealingly relaxed kind of prose.  Perhaps that only works when writing adventure stories for boys - or perhaps in that era, the afore-mentioned lack of self-doubt was mitigated by the kind of dynamic, adventurous spirit that drove the Victorian age.  After all, Victorian imperialists may have been arrogant, but as Yuval Noah Harari says of exploring and conquering, the whole enterprise requires an admittance of ignorance at the outset.  Meinertzhagen's writing has a similar kind of sturdy Britishness to Stevenson's, but lacks the appeal.  Perhaps it is because he writes as an older man, perplexed at modern views and fashions, but refusing to concede that he might be stuck in the past.  Part of this, and particularly jarring, is his discussion of Rhodes, and race. (p.215-16) 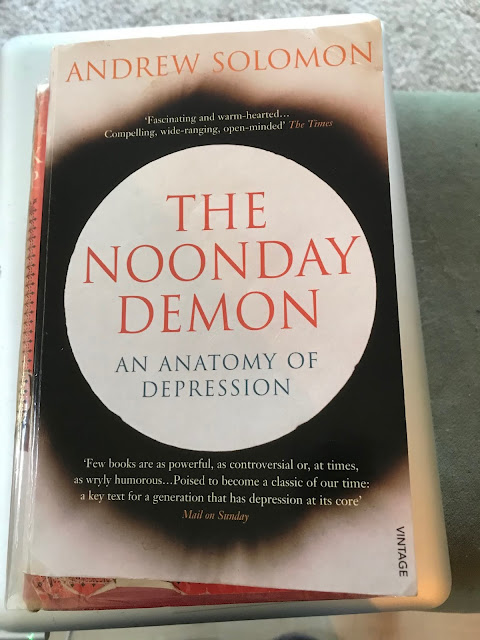